A portrait series portraying the people that live and work on West Green Road in North London, UK.

The photographs are of the people that run, work in or shop at the independent shops along West Green Road, some have lived in the area for their whole life, others have moved more recently. Nearly everyone has something to say about the road or the community here. The photographs and captions exist as records of my interactions, however short, of the people that I have met, photographed and spoken to on the road. The portraits act as a document of a place in flux, on the cusp of change and regeneration.

West Green Road runs west from Seven Sisters station in the borough of Haringey, north London and is home to a strong community of people from all over the world. It has been reported that there are nearly 200 different languages spoken in Haringey, making it one of the most diverse boroughs in the country. West Green Road is a particularly traditional high street, versions of which can be found everywhere. The road is home to all of the businesses that you would expect to find, butchers, bakers, convenience stores, beauty parlors, hairdressers and barbers. This road would be particularly familiar to anyone who has visited or lived in the outer boroughs of London where roads like this are home to independent businesses that are specific to a particular community. The businesses do not just exist as places of work but where families and friends socialise. This is particularly evident in the barbershops, hairdressers and various beauty parlors at the weekends.

West Green Road is starting to change. The surrounding residential areas and council estates are being redeveloped and the road has been given a new lick of paint. Haringey council has been assigned £50,000 from The High Street Innovation fund to improve a section of the road, which runs from Seven Sisters station to Lawrence Road. This is the part of the road that I walk down most days on the walk to the station from my flat. This initiative is a part of the Tottenham Regeneration Programme and has provided a selection of local businesses with funding to redesign and repaint their shop fronts with the guidance of local artists, in an attempt to make the road more aesthetically pleasing. The regeneration project that is currently underway in Tottenham aims to bring 5,000 jobs and 10,000 new homes to the area. Tottenham has a troubled history, experiencing two major riots in two decades, in 1985 and 2011 and has been plagued by bad press surrounding its services. Haringey has 10,000 people on the social housing waiting list and has one of the highest unemployment rates in the country. The regeneration plans have been welcomed by most residents, especially those of West Green Road who are seeing the first signs of the road returning to its former glory. However, issues surrounding the new £400 million Tottenham Hot Spurs stadium development, just up the road, and the loss of homes and businesses, as a result, make it clear that regeneration is a positive thing, only if executed sensitively with the communities best interest in mind. I have lived in this area of North London for five years and, as is normal for city living, have never really connected with the community that I live amongst.

This project’s main purpose was to encourage me to engage with people that I walk past most days, so that I could understand and perhaps also become a part of, it’s ever- changing history. 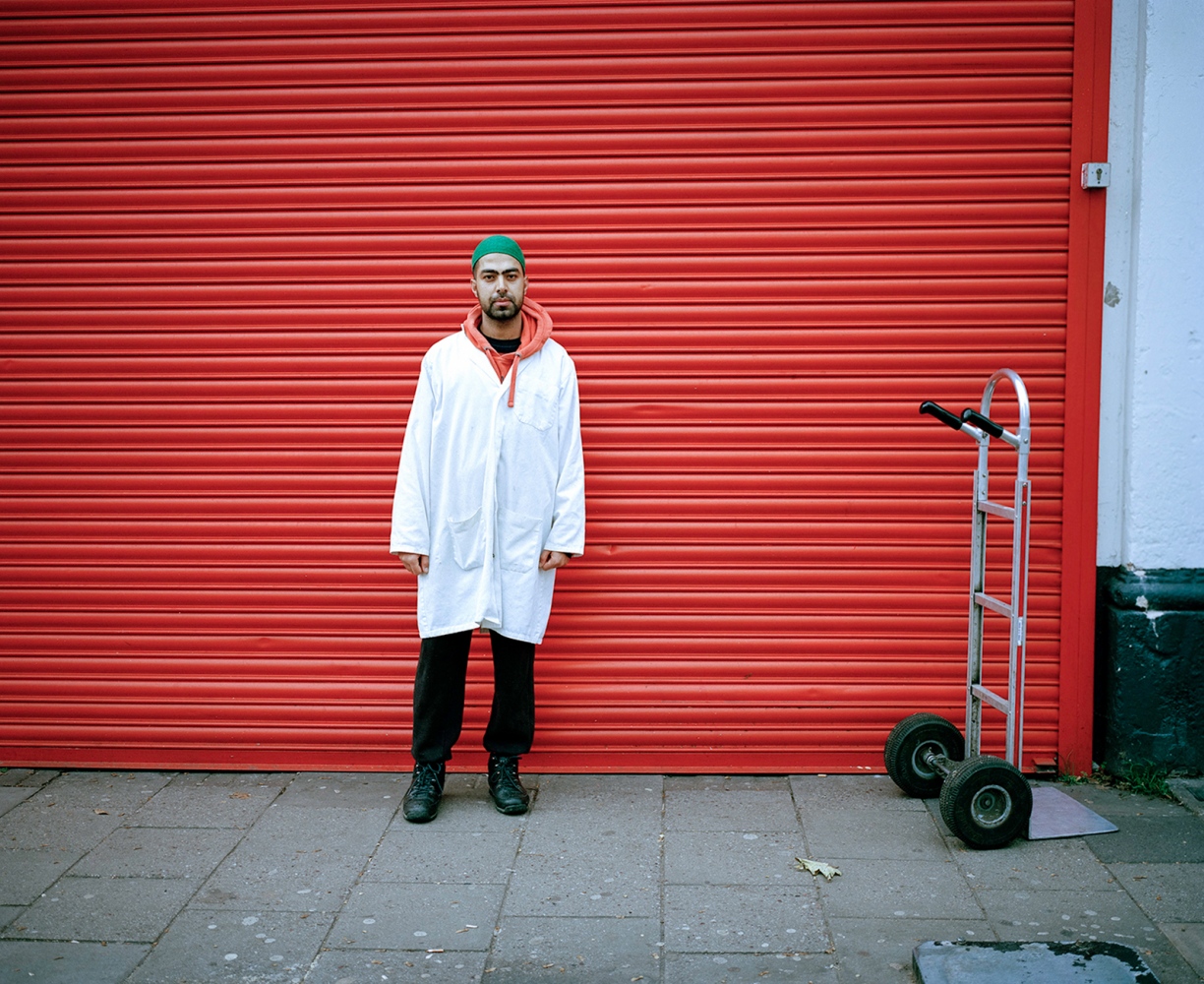 The KM2 Meat Shop (one of three butchers on the road) has a store room around the corner from their shop. It’s a regular sight to see the men who work there pushing shopping trolleys piled with crates of meat, usually whole animals, from the side road and along the busy street to the shop. 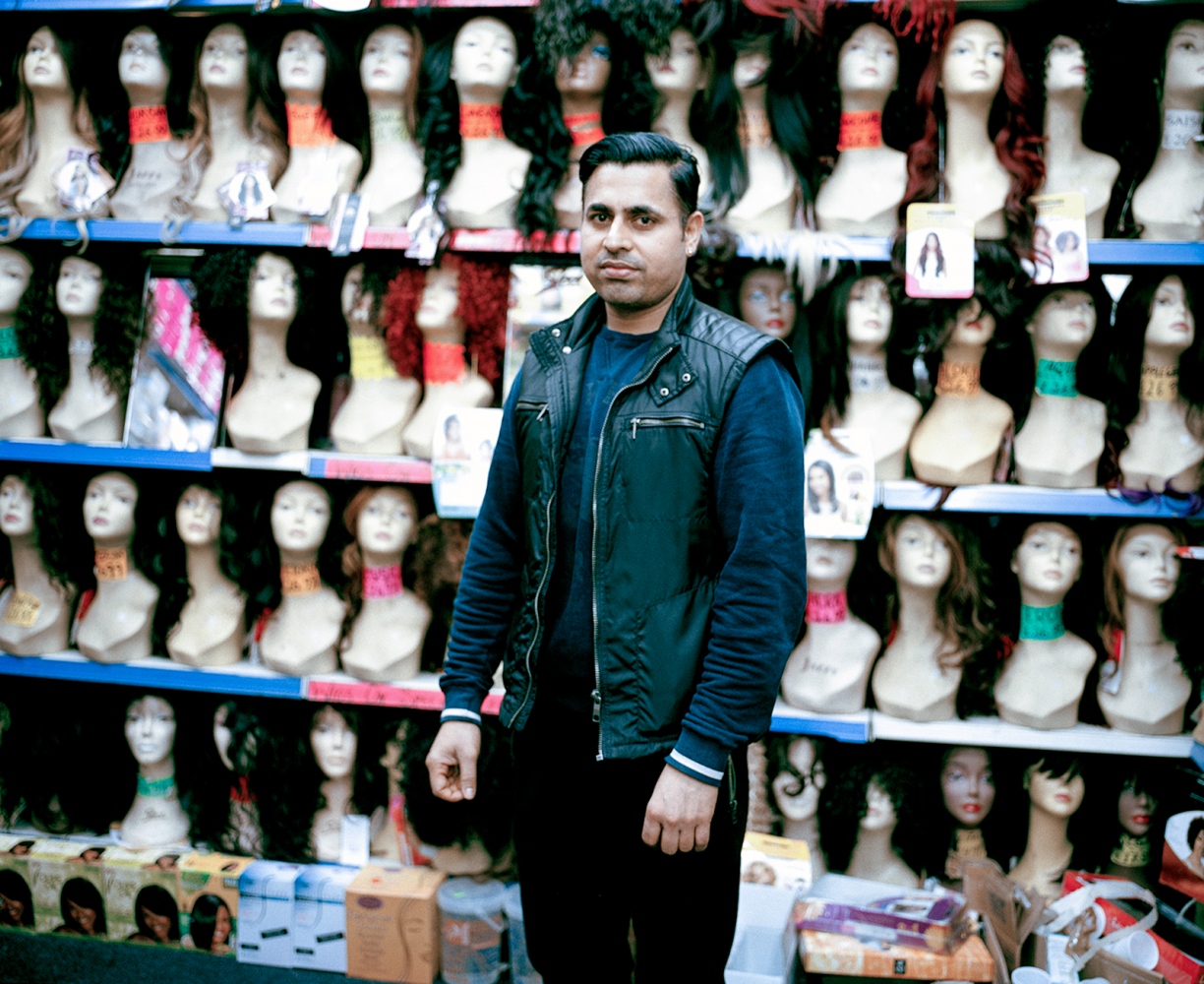 This is Sonu Singh. He works in Beauty Queens Cosmetics which is a shop specialising in fake hair and beauty products. Sonu is from Punjab and had been living in London for 8 years. 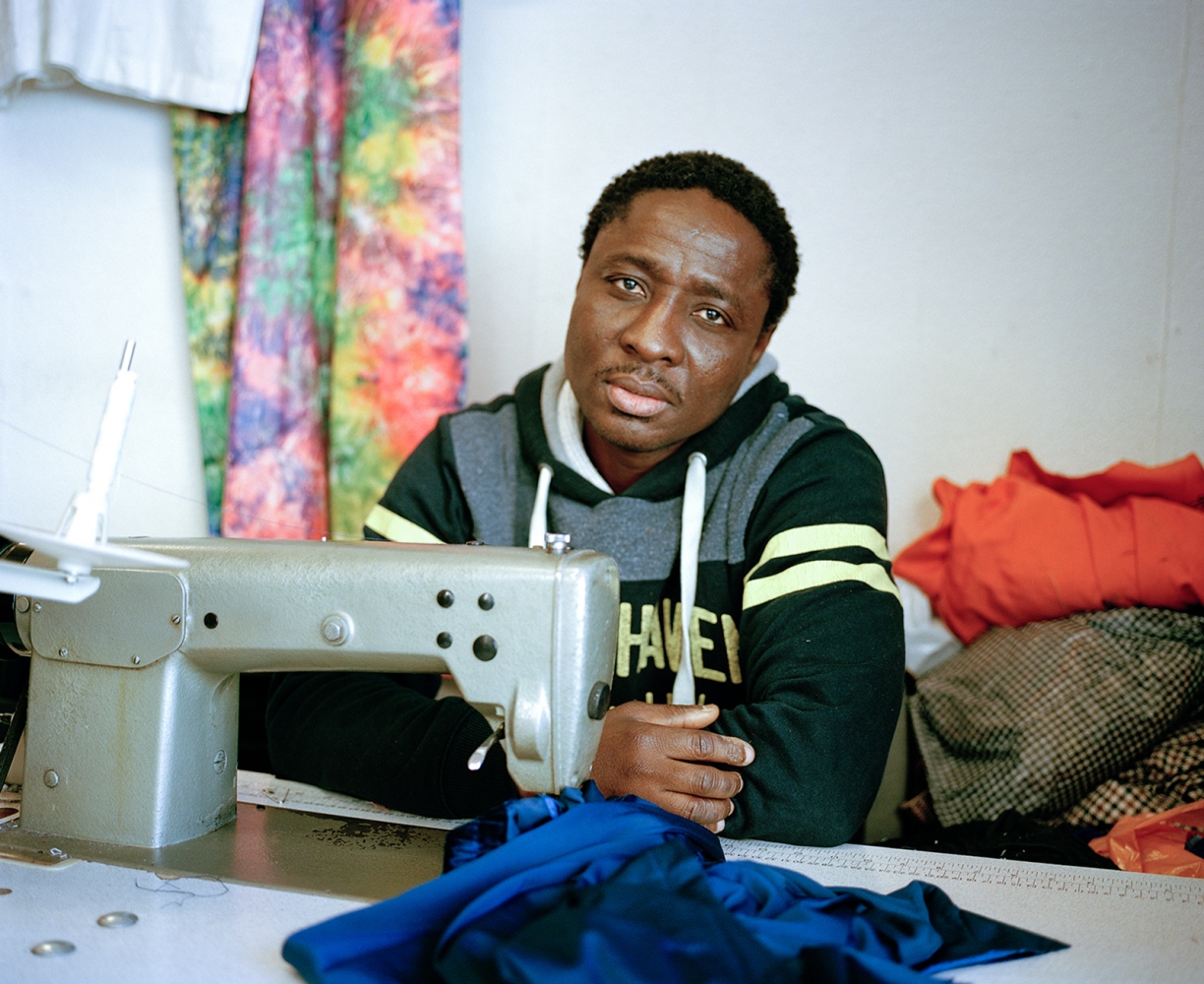 Billy works in a small corner premises making clothing. The business name is African Textiles, he has been working here for 1 year but has been in London for nearly five years. He is originally from Ghana. He tells me that it's a beautiful country and people are much more relaxed there. He invites me to go with him next time he returns. 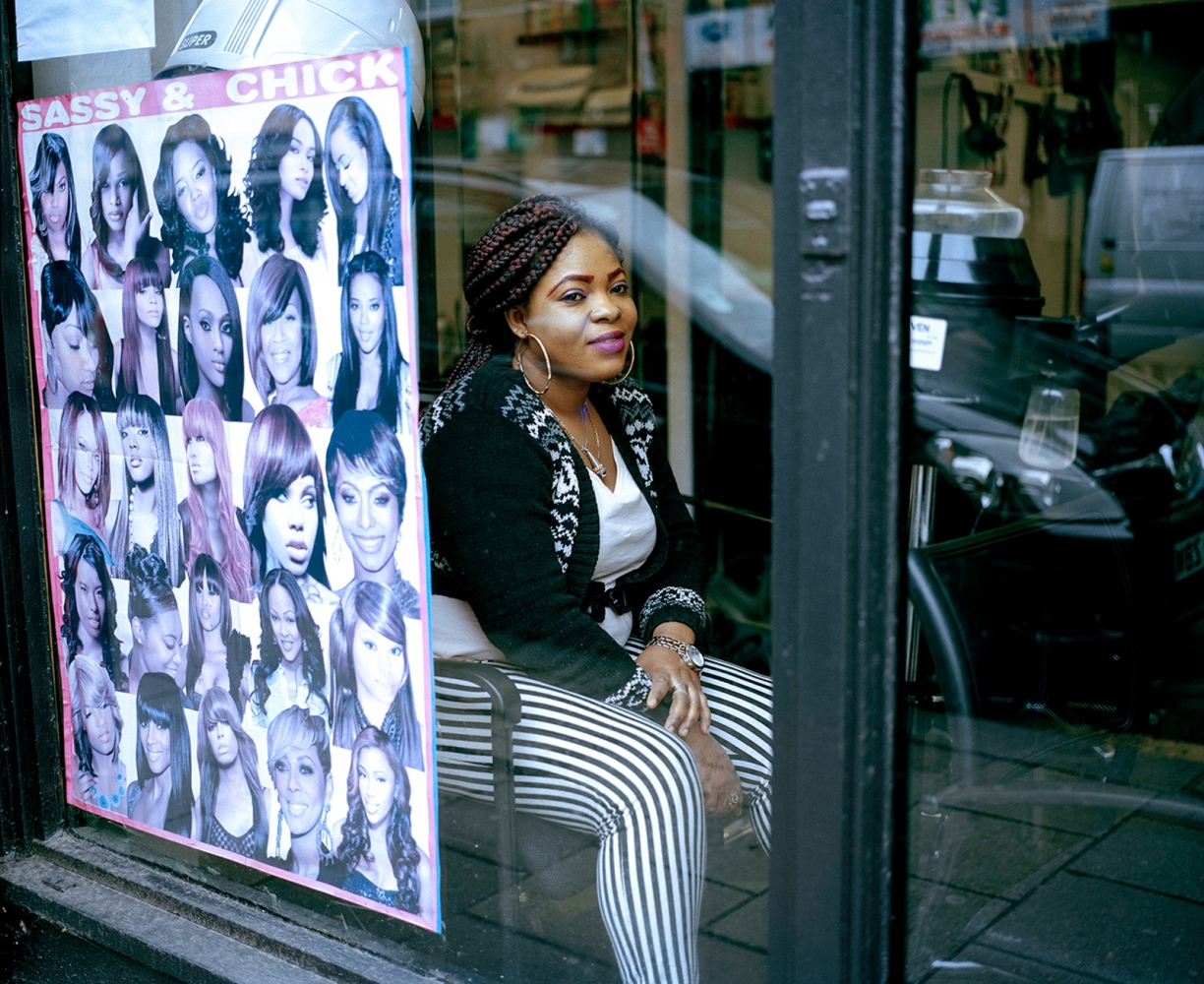 Regina works at Visions Hair Salon. It's a small place but usually full of people. I could do an entire photo series on the changing hair styles of Regina. Visions salon is one of the businesses that had their shop fronts redesignedas part of the councils High Street Innovation fund. They have opted for a quite stylish but understated black and white cubist design. 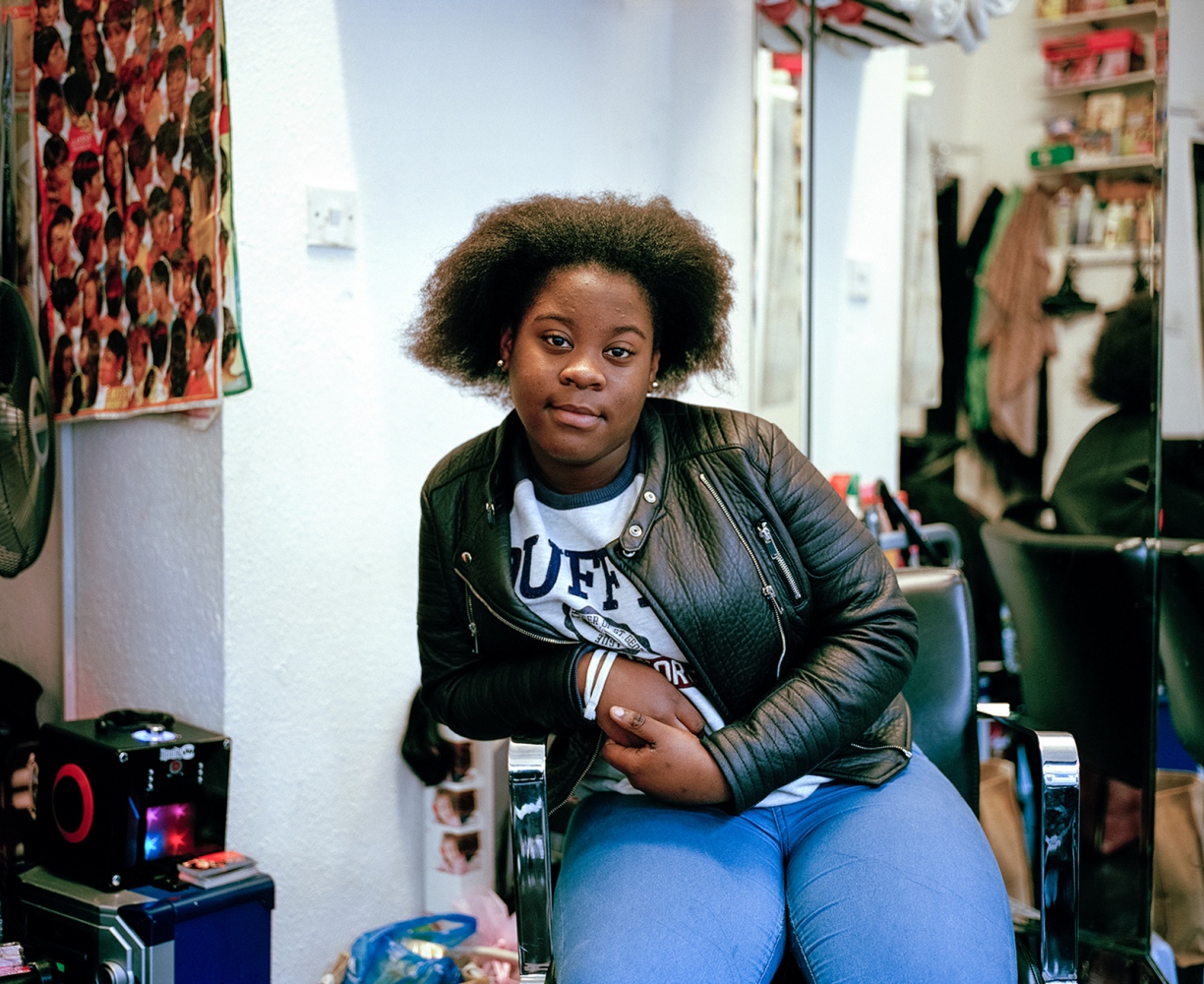 Anna was having her hair done at Visions Hair Salon, she asks me a lot of questions about photography. Anna also asks if I will take photographs at her mums birthday party (I say yes). She is pretty comfortable in front of the camera and says it's because she takes so many selfies. 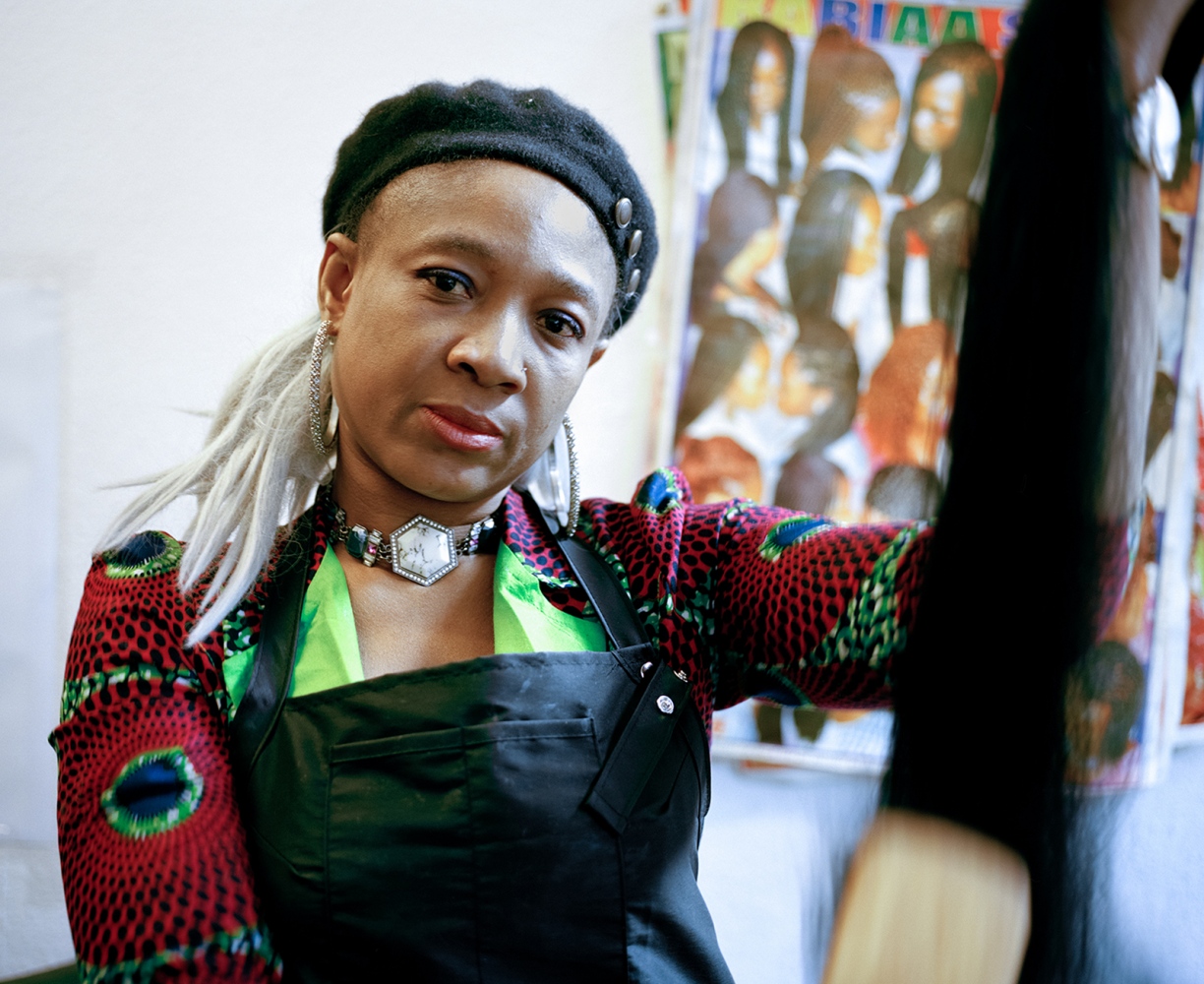 Gifty works in Visions Hair Salon with Regina (she is brushing hair in the photo). She has only been in London for one month, previously she was living near Swindon where she lived for four years. Gifty is orginally from Ghana. 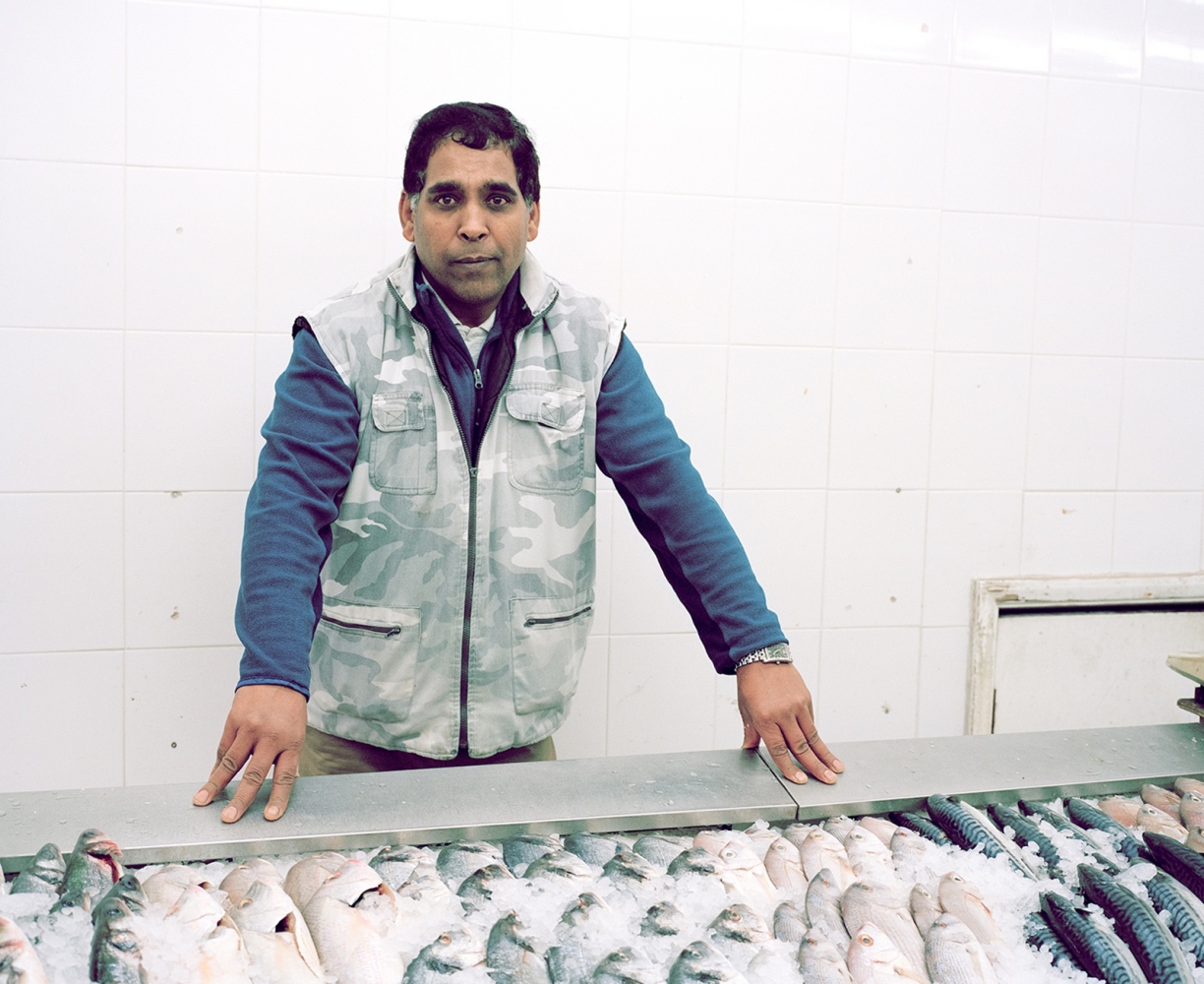 Mohammed Asghar owns Shaba, the fishmongers closest to Seven Sisters station. Despite being the boss he always seems to be busy serving customers and helping his employees. M. Asghar doesn't speak much to me, but is happy to have his photograph taken. 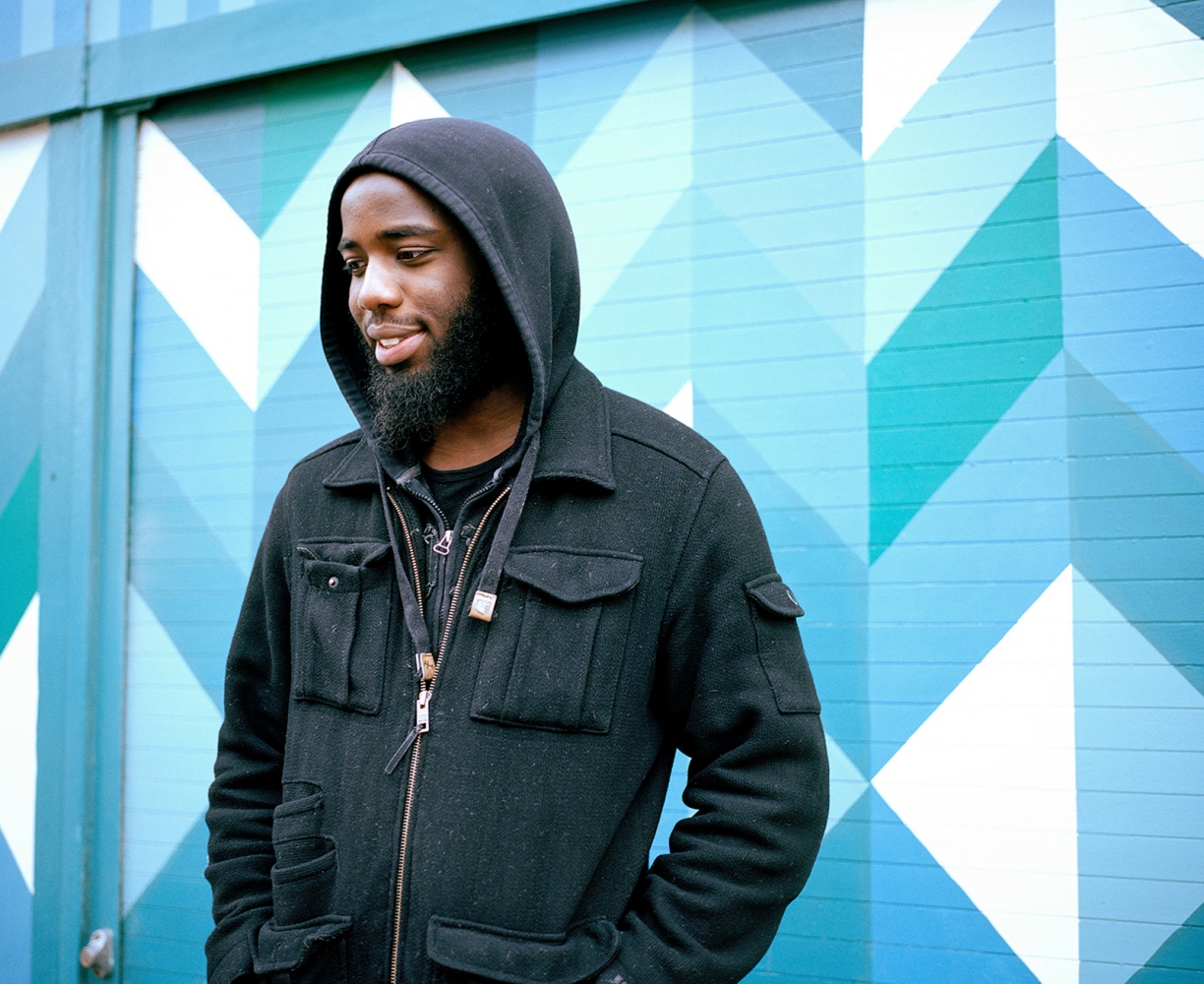 Abdullah owns WG Carpets. He has lived in Seven Sisters since he was born and his family live down the road. WG Carpets is one of the shop fronts that was redesigned as part of Tottenhams High Street Renovation Fund. The shop has been painted in the style of a Persian rug.

Abdullah reluctantly agrees to have his photograph taken. I send it to him and he doesn’t like it (he claims to not ever having liked any photographs of himself). I ask him if I can take some more in the daytime when the light is better. He says yes, because he looked at my website and understands what I am trying to do but asks me to come back another time.

On New Years Eve, I go and see Abdullah. He isn’t comfortable in front of the camera so we talk whilst I take photos. He tells me about the Islamic New Year. 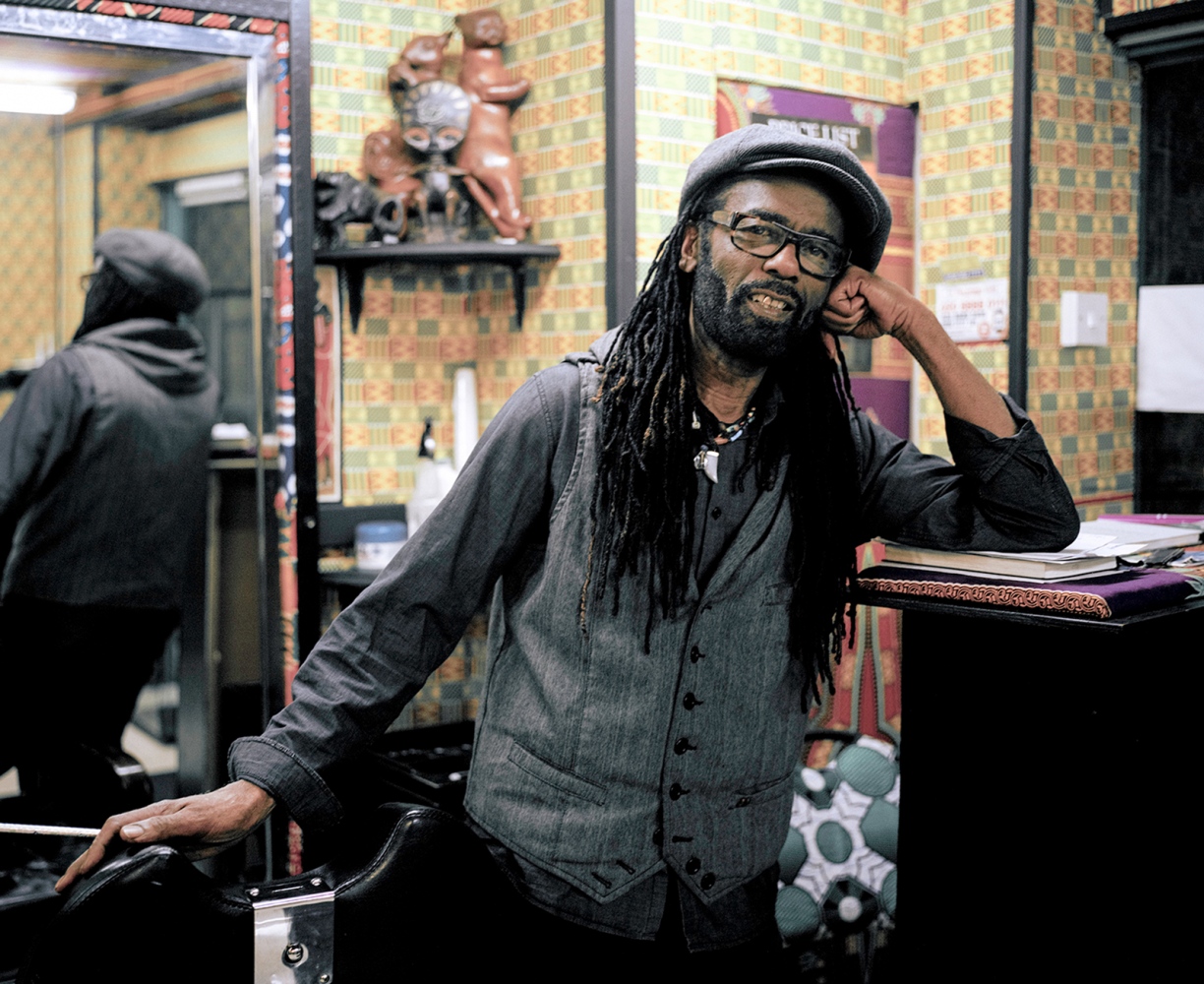 Bush owns Elegance Natural Hair Salon, he has been on West Green road for 7 years.

I spend a Saturday afternoon with Bush at the salon. Whilst he is busy working he talks to me about a variety of things. We have a long conversation about fruit, he tells me that you can get purple mangoes in Jamaica and that all lemons are genetically modified from what was origianally called 'The Ugly Fruit', a giant lemon. He compains about the lack of juice in oranges.

Sharon, a friend of Bush's, tells me the road isn't as busy as it used to be. She tells me that a few years ago, you couldn't move for people on a Saturday as the West Indian community would come here to buy specific things from home. This community is spread out all over London now and they can buy these things everywhere, so there is no longer a need for people to come to the road anymore. 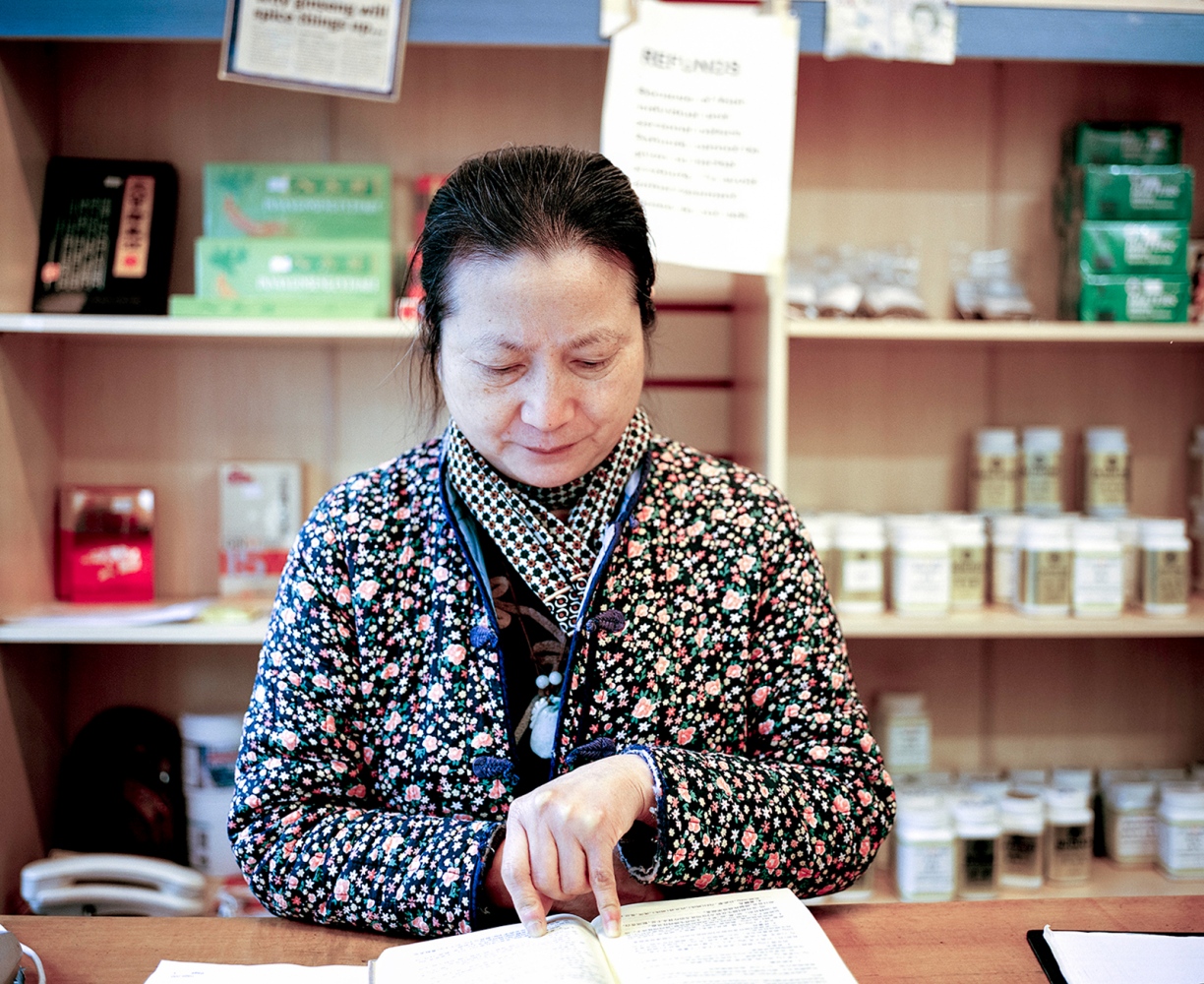 Ling Han owns Chang Jiang Chinese Medicines, which has been on the road for twenty years. Ling tells me she is happy to have a photograph taken as she likes to support the younger generation. 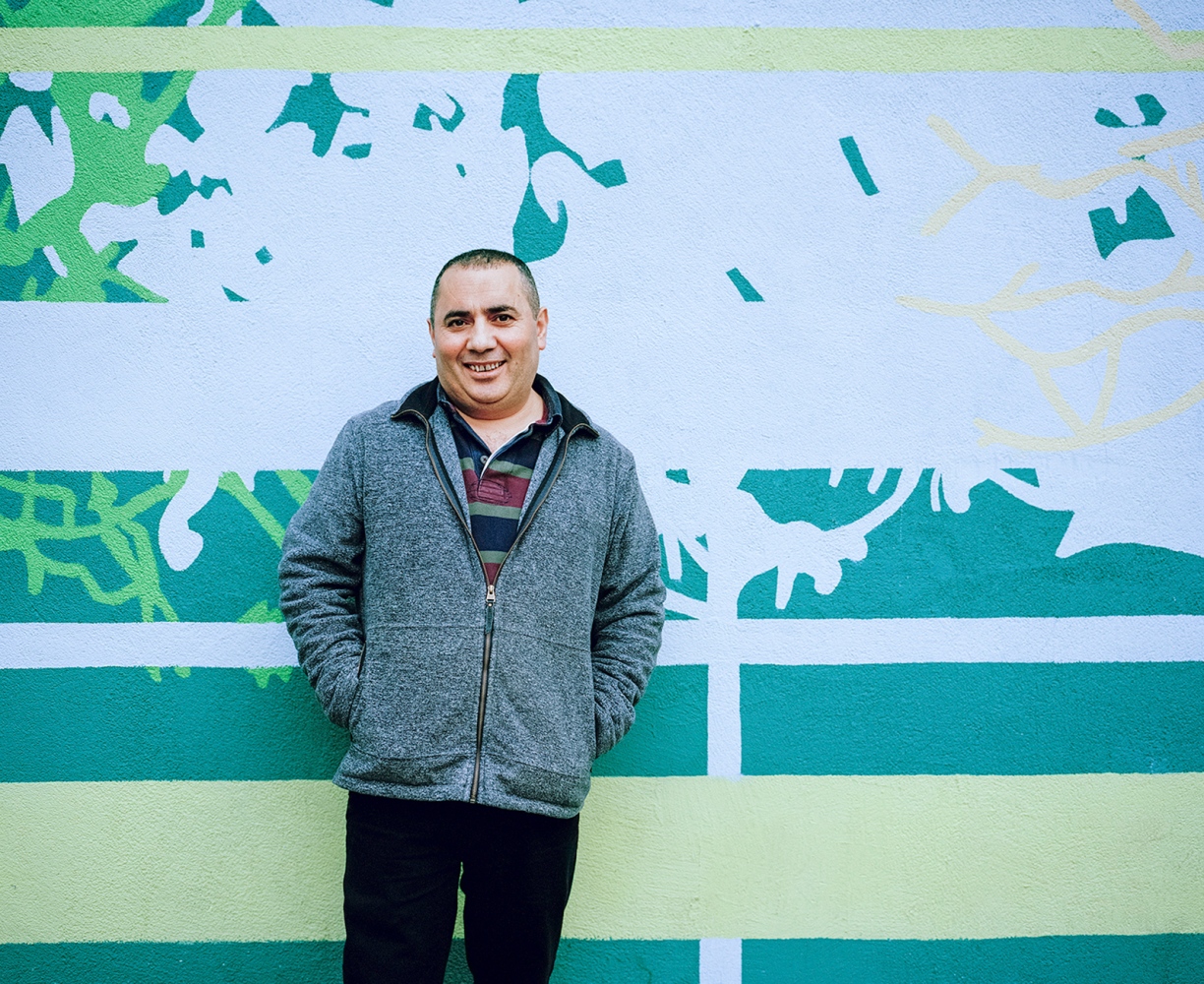 Mehmet Guler runs Gunaydin Super Market on the corner of West Green Road and Lawrence Road. Mehmet stands in front of the mural that has been painted on the shop exterior. We don't speak each others languages, so not too much is said. 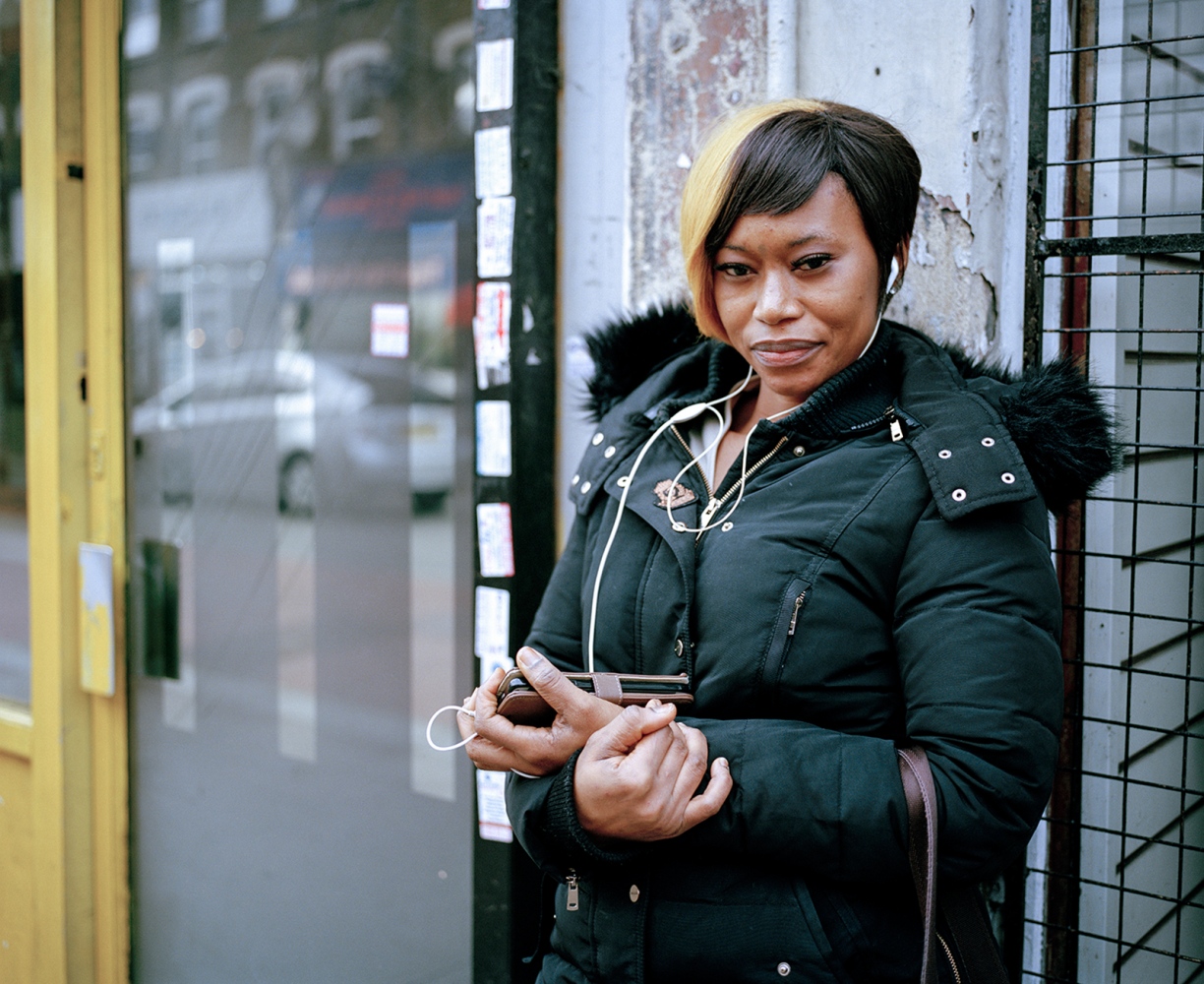 A woman waits for the no41 bus on West Green Road during the morning rush hour. It’s a busy stop and always tricky to maneuver ones way through the crowd along the too thin pavement. 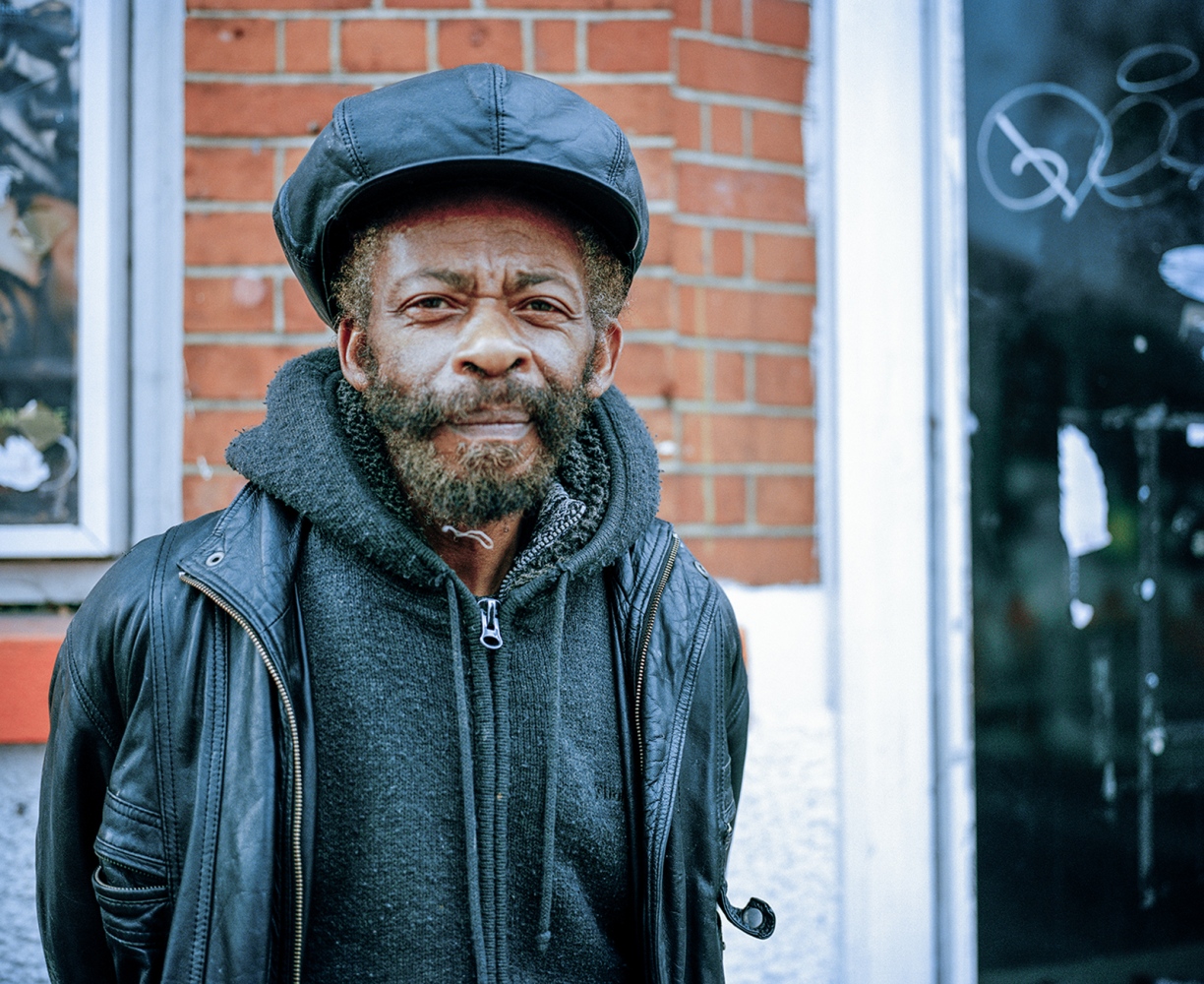 This is Ras Imruh Asha, he is a reggae artist who has been making music for the last thirty years. When I take his photograph he is with a friend who his selling his latest album, Backs Against The Wall along with the usual incense sticks, on the corner by the station. 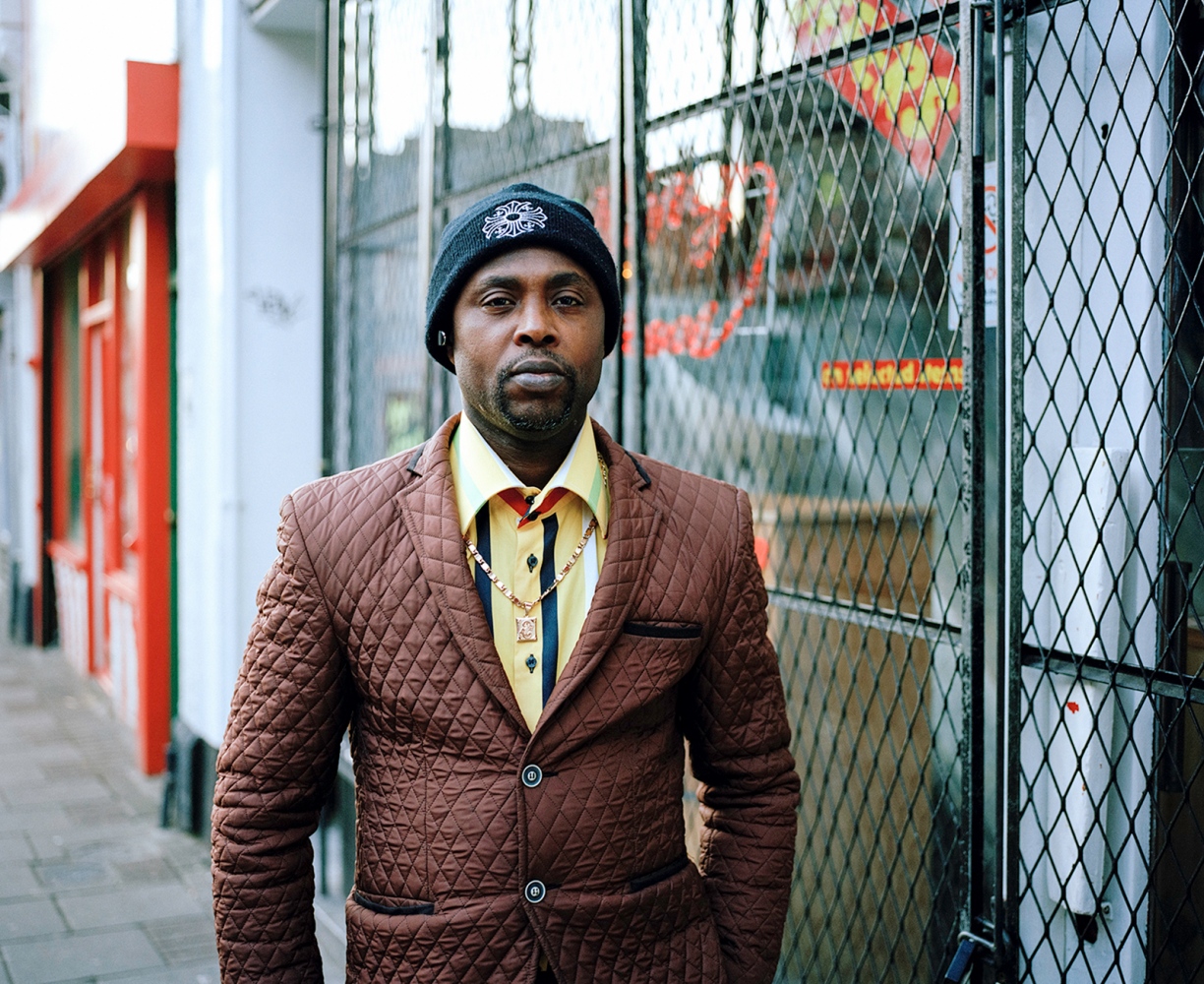 This is Osur. I meet him on the street. He is dressed very sharply and carrying a lot of shopping bags which he insists on putting down for the photo. Osur doesn't seem to want to talk to much so we shake hands and go our separate ways. 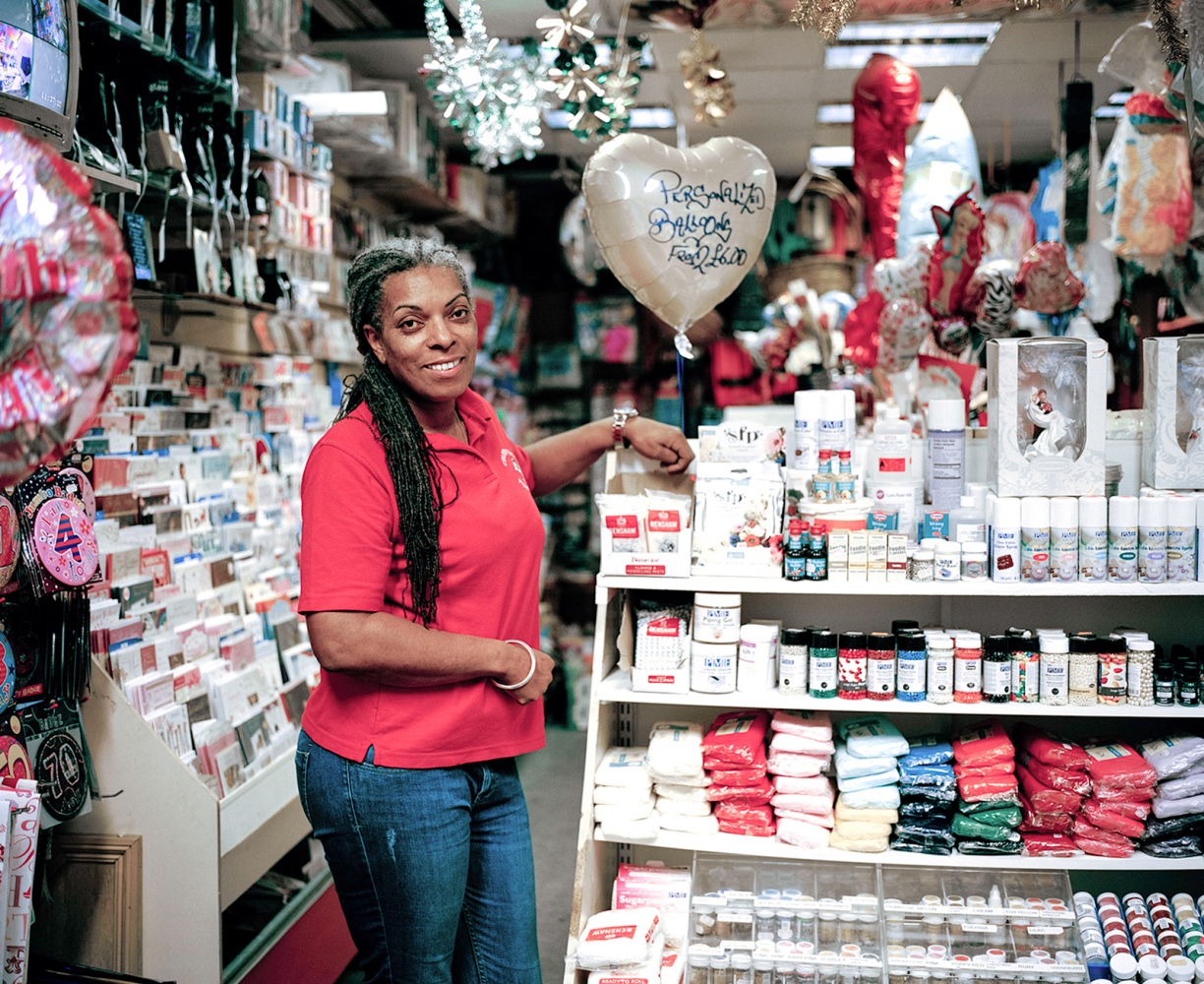 Maureen owns the partyware shop, Celebrations and has lived in the area all of her life. She tells me that when she see's little kids being pulled along by their mothers whilst doing the shopping on the road, she remembers being that kid and how bored she used to get, especially when her mum would bump in to someone she knew (which was every few steps) as they would stand and chat for what felt like years.

Maureen has had the shop since 1996, so nearly twenty years. Her son, Nick is coming to work for her soon which she is really looking forward to as he needs a new direction in life (he has a degree and wanted to go in to social care but ended up working at a bookies) and it also means that he can look after the business whilst she can think more creatively. Maureen has one of the biggest smiles on the road and her energy is contagious.

Maureen has seen the area change a lot, she has a lot of history here and knows nearly everyone on the road. For the first time I get a sense of a community here. It's disjointed, but there.

Celebrations also had their shop front redesigned, Nick tells me that it has made a real difference, a lot more people come in now and business is getting better. 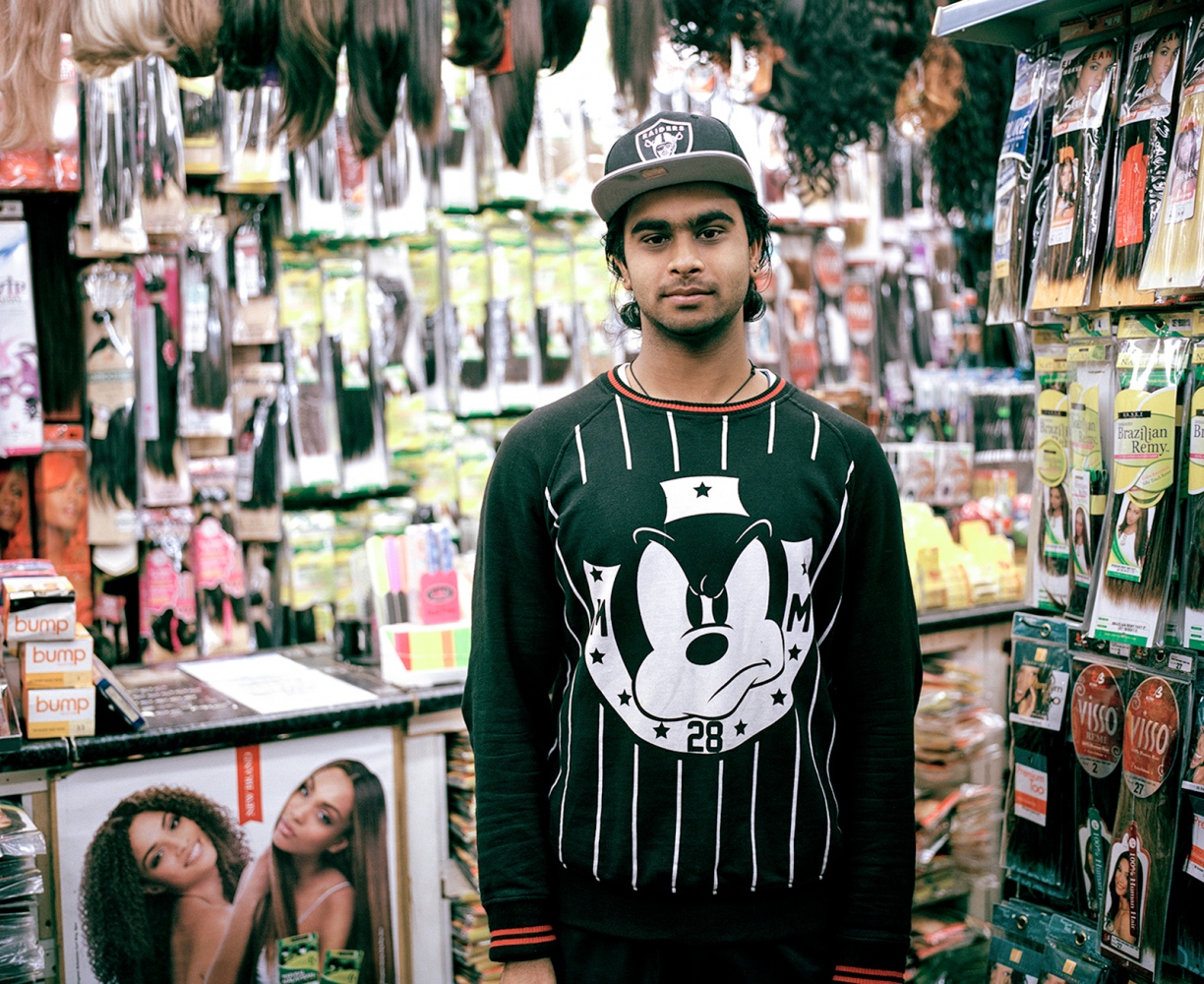 This is Rajindar, he works with Sonu in Beauty Queens Cosmetics. 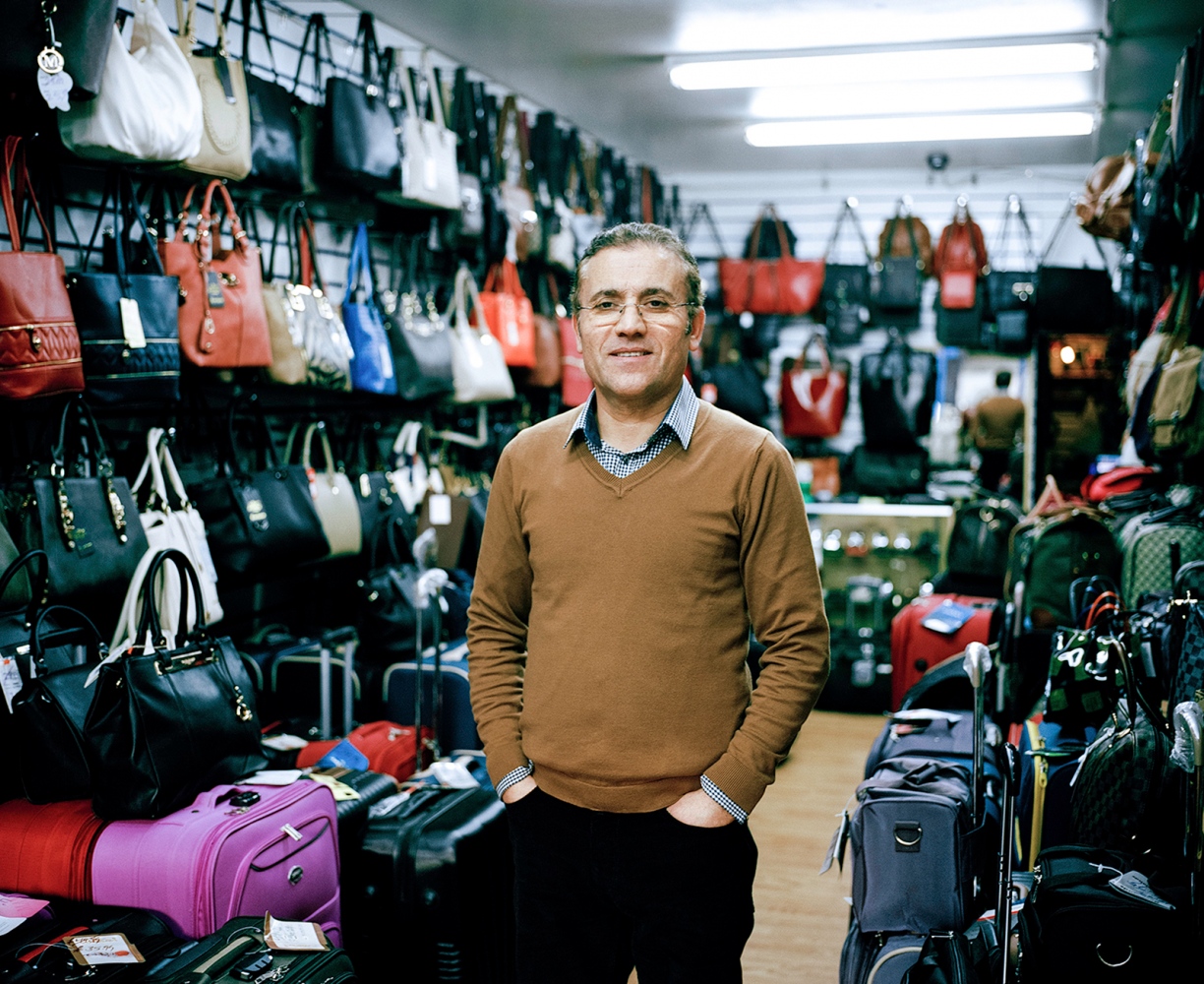 This is Shahram Torfakh, he owns Ark Accessories which is a bag and accesories shop. He has another shop in Edmonton. Shahram has had the shop on West Green Road for nearly seven years. Shahram is from Azerbaijan, he tells me a little bit about the country and invites me to go with him. 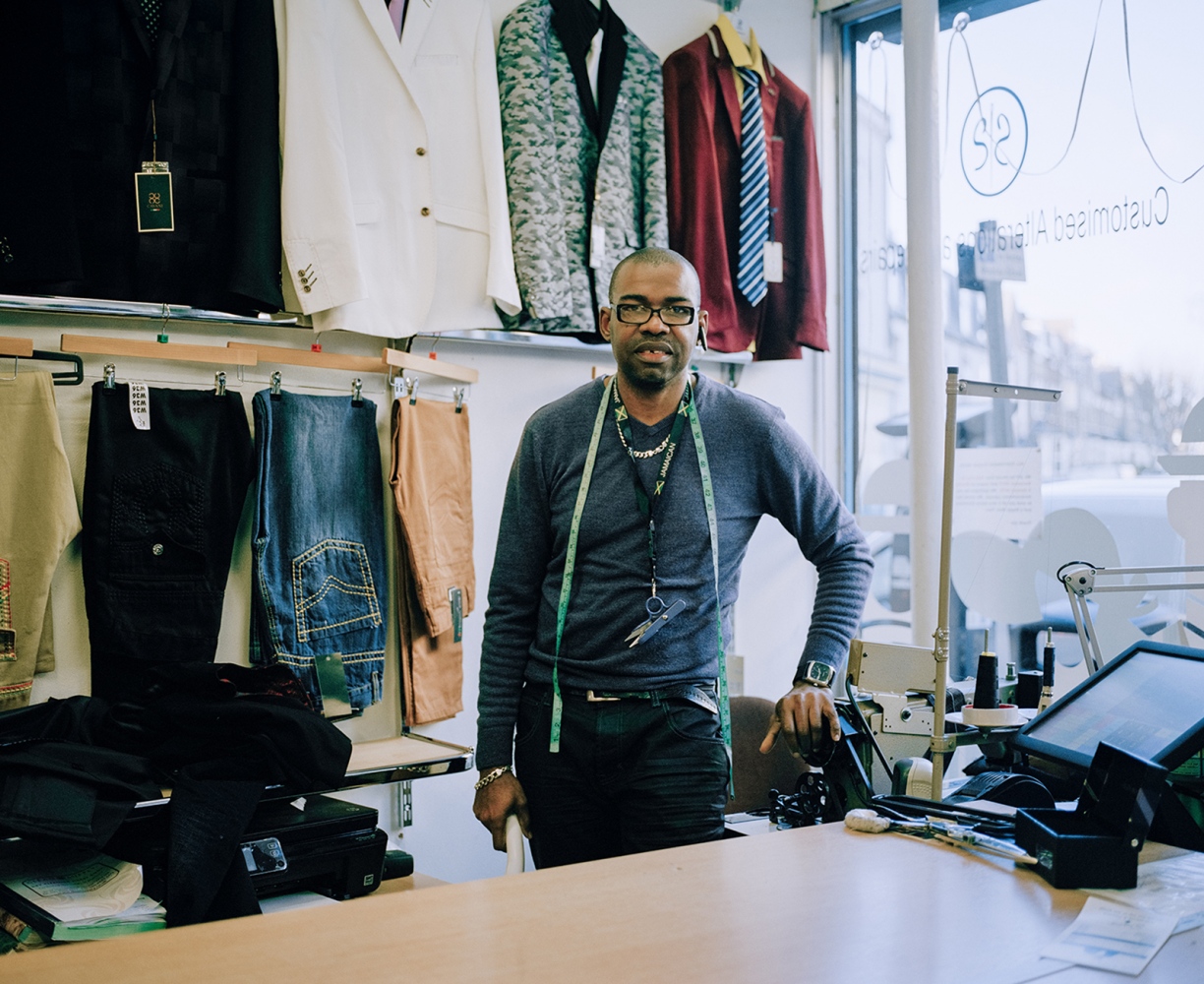 Simon Stewart has been running his tailoring business on the road for 7 years. 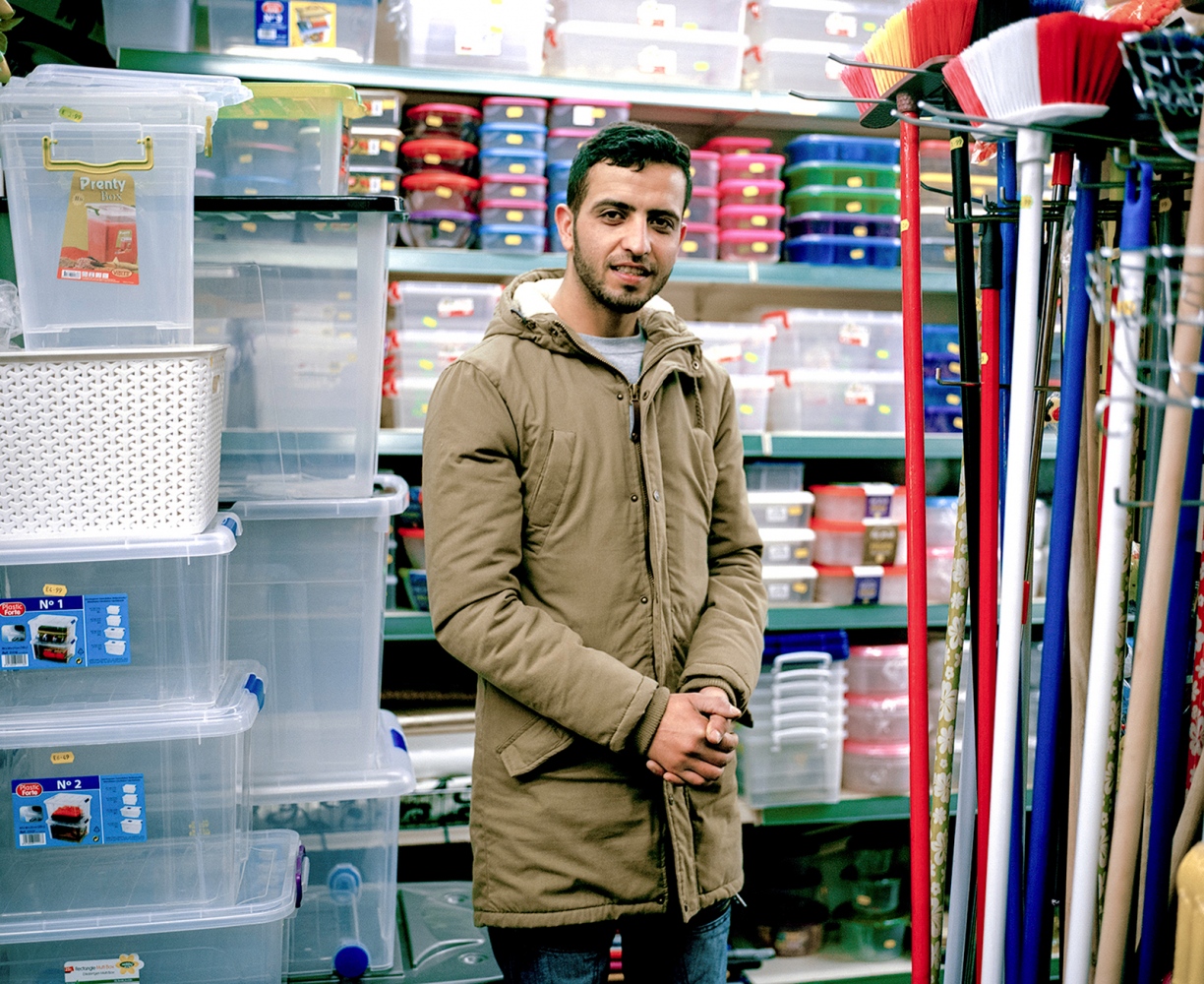 This is Tariq Zakil, he works in one of the shops which sells everything and anything. We don't have a long conversation, he seems quite shy. 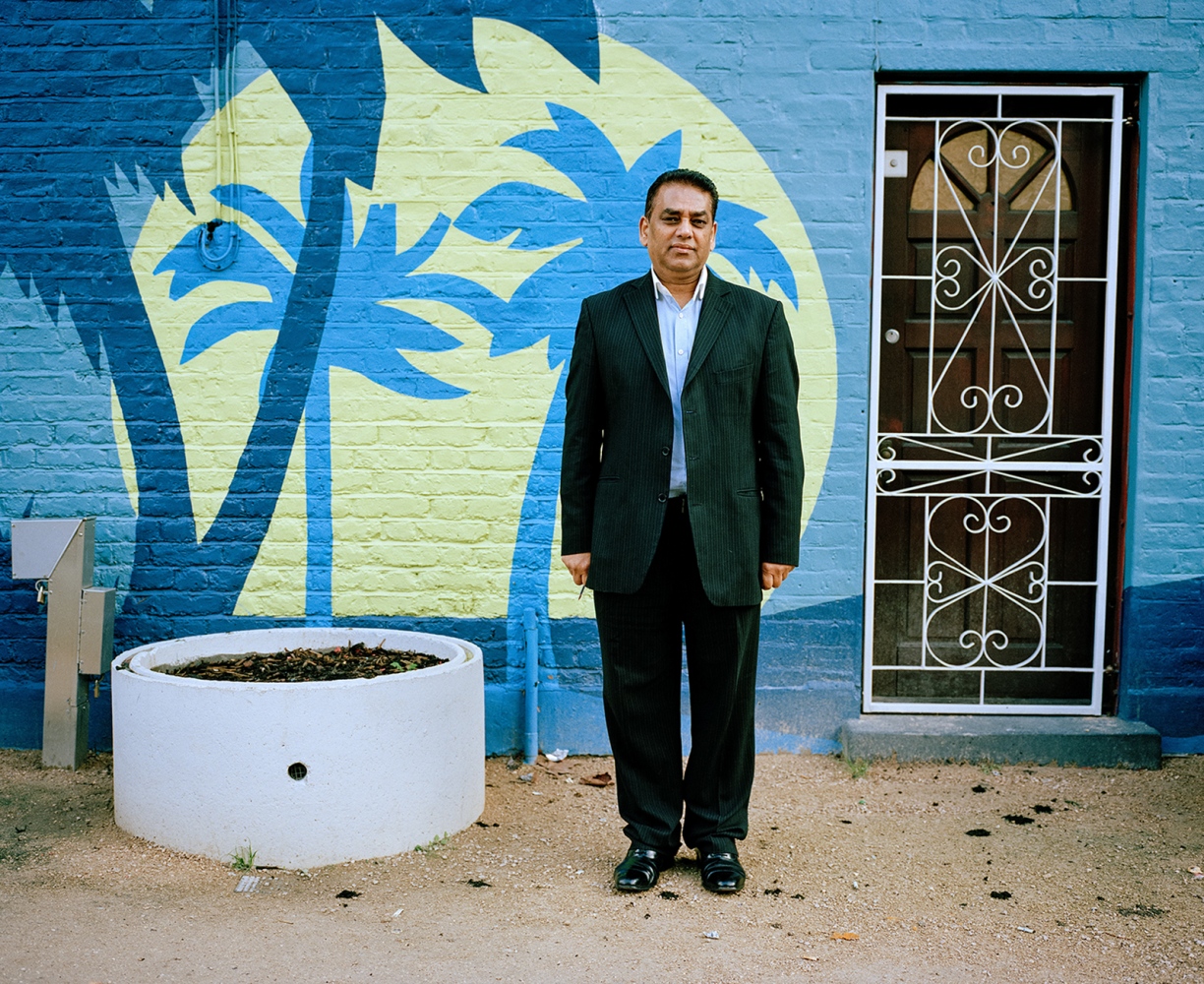 Tony Alan is the manager at Imbel Travel Agents, pictured here with the mural that has been painted on the outside of his premises. The mural was painted as part of the Tottenham regeneration project. An 'urban park' has been built on the small piece of disused land next door.